Our guest of honour for Ropecon 2017 is Anna Westerling, a larp developer from Sweden. Westerling has been an active member in the Swedish larping community and also worked in the field ever since she came across larping at the age of thirteen. Ropenomicon interviewed Westerling about her beloved hobby and how she has turned it into a career.

Anna Westerling as her character in the LARP game Fortune and Felicity. Photo: Kalle Lantz and Frida Selvén.

How did you end up working with games?

When I was 13, I heard about this thing called LARP and I knew, I just knew. I wanted to do this and ever since I have in different ways strived towards LARP and the LARP movement.

You have studied theater as well as technology. Have you been able to use and combine these different fields in your work?

I feel as a LARP producer I combine them everyday. You need theatre for the aesthetics and the drama, and technology for the production and planning. I can, of course, be uncertain how much of my coding skills or maths from my technology education I actually use, but they say that one thing you learn is how to think, so maybe I did that. Another advantage is that being an engineer in the culture sector gives me an edge, since it’s something different compared to other people working in culture.

Did you find LARPs and theater at the same time or did theater lead you to larping, or vice versa?

I watched a lot of theatre as a child, and was always interested in it, but I found LARP as a hobby first. Over the years I participated in different amateur theatre groups as an actor, but I always felt that acting was fake, you don’t empathize with your character as you do when larping. So I’m definitely more of a larper. But I have studied theatre and worked with it, for example as a theatre producer. I feel my theatre background has been visible in some of my work, such as the LARP A nice evening with the family, which was based on seven different Nordic plays by Ibsen, Strindberg etc. 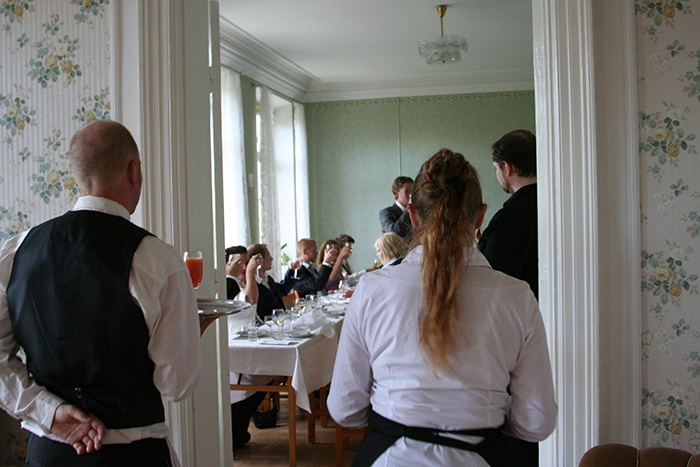 The LARP Nice Evening With the Family was based on some of the most famous plays in Nordic literature.

What is important to you when you design games?

I want to give people an emotional journey, which means giving them a story that touches them and creates feelings. I also like to design around everyday themes, for example family, friendship, love, etc, rather than creating more action focused games.

I believe that as technology develops, the more you can utilize it and use it more seamlessly in LARPs, but in the end, I’m an analogue game designer. I like the social interaction between people, face to face. I believe you can use technology such as social media to support the game around it, for example as the czocha book is used before College of Wizardry, or by sending a SMS in the game as they do in Lindängen, or by building a full scale system as was done for Monitor Celestra.

What has been your all time favourite project?

I feel this question is like asking me to pick my favourite child. I enjoyed all my projects in different ways. I enjoyed hanging out with the gamemasters at A Nice Evening With the Family, I enjoyed creating Summer Lovin’ with Trine Lise Lindahl and Elin Nilsen, and I enjoyed the beauty, the scale and the impact of Fortune and Felicity, etc. 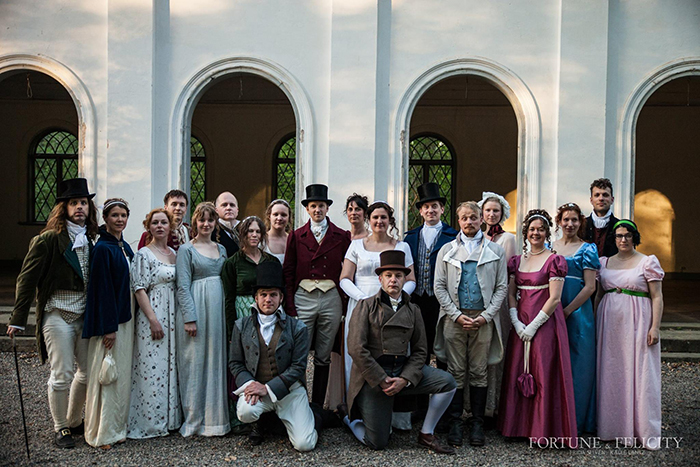 Set in the fictional world of Jane Austen, Fortune and Felicity featured an array of gorgeous costumes. Anna Westerling (near the center) is wearing a white gown and an a pair of white long gloves. Photo: Kalle Lantz and Frida Selvén.

What has been the best LARP you have participated in?

I will answer as a player. There have been many good LARPs, but as one example, I had a strong emotional experience with the well-designed LARP Just a little lovin’. I also enjoy freeform games such as Deranged, 183 days, Rosenstrasse, The Last Adventure, etc.

What makes a good LARP?

To me a good LARP is well designed with a clear premise and a tight narrative. It has a clear framework, and you know in which direction you should play towards. An example of a game I enjoyed was Just a little lovin’ (2011). It is set in the beginning of the 1980’s when AIDS came to New York. We played three party nights, set on the 4th of July in 1982, 1983 and 1984. Each night had its own theme, ranging from friendship, to paranoia, to death. The progress in time, and the theme of each act made the game powerful. Add to that the design feature that in the end of each act we had to put tickets in hat and draw who had gotten AIDS or died during the last year. This created a powerful and emotional experience where you played on friendship and later the fear and the paranoia of death and the disease itself.

This brings me to my second point of what a good LARP is. I think a LARP should be an emotional experience somehow. I want to feel and experience a story as I larp. Another example of a game I enjoyed, and designed, was the game A Nice Evening With the Family (2007). We performed several Nordic plays, such as The Celebration by Tomas Vinterberg, A doll’s house by Henrik Ibsen and Miss Julie by Strindberg simultaneously and as an interactive experience during one evening in a LARP. It was a 1960’s birthday party with a diner and all that belonged to that era. The game had an arc that went from good, to worse, to bad as we all played out the dramatic stories from the plays. All the plays were about families and this created strong emotional bounds and a lot of drama as the families fell apart. I like to play around with themes of everyday life, family, friendship and love. No monsters, just what everyday people do to each other.

I also like LARPs where you bring yourself in the game somehow. In the freeform game 183 days, the players ask each other some personal questions, which creates off-game emotional bounds and makes the game stronger.

When we designed Fortune & Felicity (2017), we used that to make the people whose characters were in love get closer to each other. We also used the techniques mentioned above — acts, breaks in between the acts, time jumps and well designed events — to tell our story about the people from the novels of Jane Austen. We build a framework that allowed the players to feel, create drama and experience their very own Austen story.

How can you adapt existing works of art into the format of a larp? Works like books, plays or music? Are there different strategies for different media, and what have been done so far? What happens when the beautiful predefined story meets the freedom, interaction and participation of larp? I will discuss works such as Inside Hamlet, A Nice Evening with the Family, College of Wizardry, MacBeth, Love stories by ABBA and the Jane Austen larp Fortune & Felicity.

Bring out your inner wizard and learn to cast spells on your friends. We will walk through a number of spells that can be used on larp, and look at how they generate game and how to make magic really happen. Fun, easy going and giggely when you get to be a wizard/witch student for a while.

Metatechniques – The World Outside Linear Storytelling

A talk about everything outside linear storytelling, meta-techniques, and how that can be used in game design in order to enhance your game. We will go through a short history and then look at some different examples of how you can use this to enhance your dramaturgy and game design.

About the beauty of friendship and the difficulty to communicate even though your intentions are good. What happens when your inability to see others suddenly leads to the realization that it’s too late? If you had the chance to do it again, how would you change it? A star, a producer and a caretaker – three close friends going away for a short holiday together to have the best time. But each character have their own baggage, and the weekend is pulled apart by quarrels. And in life you don’t get second chances.

Sex – Awkwardness – Rock ‘n’ Roll Three girls, three guys and the stories about who did what and with whom during a big summer music festival. We will get the story as told by the girls, as told by the guys and then finally played out as it really happened. It’s summer lovin’ and tell me more. This scenario is not about finding your perfect partner, having amazing sex right away, and living happily ever after. It is a scenario about the uncomfortable hook-up in the tent, the grass in the ass, and the poor communication which leads to it all being awkward. But also about the nice feeling of making out, the thrill, the hope of something more, the fun and the laughter. What really happened during the festival? How did the dead gorgeous guy you hooked up with turn out to be your crappiest lay ever? Or how did you end up in the caravan with the girl you’ve wanted for several years, even though you shouldn’t have been there in the first place? At least according to your partner. Sex is a the main theme of this scenario, but you will not get physical with the other players above holding hands. Then the scene will be told through storytelling down to every nitty-gritty detail, both physically and emotionally. Just tell me more! By: Trine Lise Lindahl, Elin Nilsen and Anna Westerling.

Lost and looking for direction? Puzzled by the local language? The International…

This year’s Ropecon, held in the Messukeskus Helsinki Expo and Convention Centre…